This interview can be heard as an audio file from the website of the Dolphin Communication Project. (Follow this LINK) 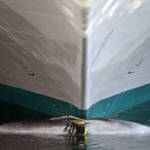 What exactly is meant by the term ‘ship strike’?

Ship strikes are those incidents where a vessel of any type, be it a kayak, a sailing boat, a cargo or cruise ship or a fast ferry, collides with a member of the cetacean order, i.e. a whale or a dolphin.

Are ship strikes a growing problem? If so, why is this the case?

Ship strikes apparently are a growing problem worldwide. The number of reported incidents is increasing steadily and some areas are more affected than others. The reasons are the growing shipping traffic, i.e. the number of vessels frequenting our oceans, and also the increasing speed of ships,especially in fast ferries and multihull sailing vessels. Both – vessel size and sped – contributes to a higher risk to encounter cetaceans at sea and, in the worst case to find them in your path.

What does a typical ship strike look like – are the animals involved usually killed or injured?

We do not know this exactly. Most cases where a ship strike can be identified are related to animals found dead at sea or on the shore, and these carcasses then can be investigated. Sometimes whales get caught on the bow of a large ship and are transported into a harbour, at times over hundreds of kilometres, sometimes you see alive individuals with cut fins or flukes. Where an animal was hit and does not immediately die, it usually simply swims away and the fate will be unknown. If this animals dies later, it may drift far offshore or sink to the seafloor. In general, the severity of an injury strongly depends on the vessel’s speed, with the probability of fatal consequences being especially high when the velocity exceeds 13-14 knots.

What species are most at risk of being struck by a ship or boat?

In the larger whales, those species travelling at low speed and those ones known to stay for longer periods of time on the water surface are especially vulnerable. These include right whales and sperm whales.On the other hand, if an animal shows curious behaviours towards boats, it will be at higher risk as well. Here, humpback whales may be included, also because they are a primary target for whale watching operations, and also many dolphins. In the Canary Islands, I have regularly observed Atlantic spotted dolphins approaching the turning propellerof our boat up to a few centimetres. I don’t know exactly why they do this, but obviously they do not know the risk. At least until they are struck by the propeller blade – and we also did observe individuals which show such propeller marks on their fins…

What do you see as the major causes of ship strikes, and how do you think these strikes can be avoided in the future?

The main factor of risk is vessel speed – as said before – combined with a high abundance of cetaceans in an given area. If careless behaviour is added – either by boat drives speeding into groups, or animals being curious, distracted or inattentive, then a collision may occur. Also, younger animals may be especially unprejudiced towards or inexperienced with vessels.Another problem is the low detectability of whales, even for trained observers. You have to be constantly alert to see cetaceans swimming in your vessel’s path. On the other hand, although this seems counter-intuitive to us, the sound generated by a ship may not necessarily be detectable by a whale until the distance of an approaching vessel becomes (very) small.To avoid collisions, there are several options: lookouts could be placed on ships which travel through areas of high cetaceans abundance or even marine protected areas. Obviously, speed restrictions will help, and this is highly recommended in high risk areas.There also might be technical solutions like infrared detectors or passive acoustic listening devices. However, the effectiveness of such technical solutions needs to be tested and until now is not well understood. It usually also depends on environmental conditions. As an example, night vision binoculars aren’t of any help when you are entering a bank of fog.Intuitively, one may also consider some kind of warning device, that is to say using sound to deterr whales or dolphins or at least make them alert to vessel approaches. But we have to keep in mind that any additional sound contributes the level of noise in the sea – we all know that cetaceans orientate themselves with sound, and that they live in noisy oceans today, with often detrimental consequences. Besides, there is always the chance that cetaceans become habituated or – even worse – attracted to such sounds.The U.S. have established a reporting system off their east coast, where mariners report their right whale sightings and this information will be transferred to large ships entering a certain area. Together with a voluntary speed limitation this is hoped to reduce ship strikes, known to number one be the mortality factor in that region.Keeping out any vessel traffic may only be feasible in legally protected or quite remote areas, where there usually is less human presence anyway.

Are there locations in the world where ship strikes are so prevalent that they are actually threatening the survival of a given species or local population?

That is exactly the case in the area off the U.S. East coast. Right whales there face extinction, there is a population of only about 300-350 animals, and ship strikes are a major factor preventing population increase. Many of the animals in that area carry scars from propellers.Also, in the Canary Islands, the local population of sperm whales apparently becomes depleted by regular ship strikes, most of which can be attributed to the high level of high speed ferry traffic.We do know that the fin whale population in the Northern Mediterranean Sea is threatened, too, because part of their habitat is one of the most densly frequented areas in ocean traffic globally.

Where do you think that ship strikes stand on the list of threats that marine mammals face – when compared to pollution, noise pollution,over-fishing, habitat loss, hunting/whaling, etc. – are ship strikes a threat to most species?

That depends on where you look at, and how you do it. In the areas just described collisions appear to be a major threat. On a global scale, the number of animals killed through ship strikes may perceived as low compared to those hundreds of thousands of cetaceans being bycaught, hunted or getting under pressure due to over-fishing. But we also have to learn to think about the complex nature of ecosytems. We have to think about these issues more holisitcally, so to speak, taking into consideration that all known threats are related to each other. The oceans are already in a bad shape. Shipping traffic is affecting the life in the oceans in every region of the world. The cetaceans’ habitats are under great pressure, and any additional threat may easily have unforeseable consequences.Yet, speaking about ship strikes, we have to admit that we do not even know the exact numbers. There is a huge gap in our knowledge about HOW severy the situation really is. We are at the stage of collecting cases (from today and in the past) and putting them together.

You are an active participant in the International Whaling Commission- the IWC. Can you tell us a bit about your work with the IWC and explain the aims of the Ship Strike Working Group and your role with this committee?

The IWC has established a ship strike working group, which has set up a data base. This is the first international attempt to draw a great picture.I used to be a national delegate to the IWC’s Scientific Committee. Meanwhile I am also a member of the Ship Strike Working Group (SSWG), where I was involved in setting up the mentioned database.I also try to contribute with the research results from the area I work, the Canary Islands. My Spanish colleagues there conducted a lot of investigations, and together we have prepared a summary of their findings which was presented at last year’s IWC meeting. The year before my organisation had realized a study quantifying the amount of ferry traffic in the Canarian archipelago and related these numbers to the local abundance of cetaceans thus identifying high risk areas for ship strikes.The SSWG is an important forum to bring together experts from all over the world and discuss the topics. At the moment the SSWG plans for an international workshop on the issue, to enhance the establishment of mitigation measures, nationally and internationally.Also, it is tried to connect the IWC with the action plans of other multinational organisations dealing with maritime traffic and ocean conservation, such as the IMO, the CMS or the ACCOBAMS agreement.

Your organization (M.E.E.R.) launched the Whale Collision Survey (2008-2010), working in conjunction with noonsite.com – can you tell us about this survey and the kind of information you are collecting?

This survey is meant to enlighten the situation concerning collisions involving sailing vessels. There are quite a few anecdotes about sailors colliding with whales, some recent cases during ocean regatta races have been highlighted in the media last year, for example.The online survey which we developed with the great help from Noonsite, one of the major sailor’s websites worldwide, is the first attempt to systematically investigate such incidents.It constitutes a questionnaire which can be answered online and is directed to sailors around the world. The questions asked include time, day and location of collisions or near miss events and factors like vessel size, hull type and speed. We want to learn about how many and how often collisions with sailing vessels occur. And how they occur. Therefore it is also asked if whales were seen before a collision, if an avoiding manoueuvres was taken, or if any injuries were observed on the animals after the collision.Again, we are the very beginning of investigating this, and the most basic data are useful. Not to forget that this is also a matter of human safety. There have been cases with severely injured crew members or ferry passengers, even human fatalities. Therefore, our interest should also be understood as an attempt to avoid collisions, both in the sense of the animals and us humans.

If there are sailors or captains out there who ever find themselves in a position where they have accidentally collided with a whale or a dolphin, what steps should they take in terms of reporting the strike and possibly seeking aid for the injured animal?

Reporting the collision is essential. The incident should immediately reported to local authorities. There may be regional stranding or rescue services available, which should be contacted to make sure that the carcass, if there is one, will be investigated. Also, any information about ship strikes can be directly reported electronically to the IWC at the email address: shipstrikes@iwcoffice.org

Please continue here for a free download of an information package on vessel-whale collisions including a ready-to-use presentation for educational use.