It will be of utmost importance that the issue is coordinated on governmental levels and within the context of relevant agreements and multinational organizations. But there is still a long way to go. Still, the shipping industry is developing ever larger and faster vessels and shipping traffic is expected to further grow in the future. Contrastingly, very little is known about sound propagation and projection into the sea by large vessels including high speed ferries.

Also, sailing regattas and so called ocean races are becoming more and more popular, and modern yachts are becoming faster and faster too, at peaks reaching up to 40 knots (see also section on sailing vessels).Today, we know so little about the manifold complex relationships that a precautionary approach is warranted. As long there is some doubt, we have to act wisely on the side of marine conservation, always thinking in the long term. After all, it is not shipping alone that is threatening marine mammals. Overfishing, bycatch, directed hunts, pollution, habitat degradation and climate change are severe and growing problems too. 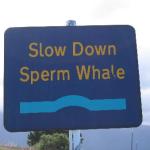 M.E.E.R. developed a list of recommendations to act as a guideline for decision makers in politics and economics to counter the problem of vessel-whale strikes:

Pesante, G., Collet, A., Dhermain, F., Frantzis, A., Panigada, S., Podestà, M. And Zanardelli M. 2002. Review of Collisions in the Mediterranean Sea. In: Pesante G., Panigada S. and Zanardelli M. (eds). Proceedings of the Workshop: Collisions between Cetaceans and Vessels: Can we find Solutions? 15th Annual Meeting of the European Cetacean Society in Rome, 2001. ECS Newsletter No. 40:5-12 (Special Issue).

Ritter, F. 2007. A Quantification of Ferry Traffic in the Canary Islands (Spain) and its Significance for Collisions with Cetaceans. Int. Whal. Commn. Scientific Committee SC/59/BC7.