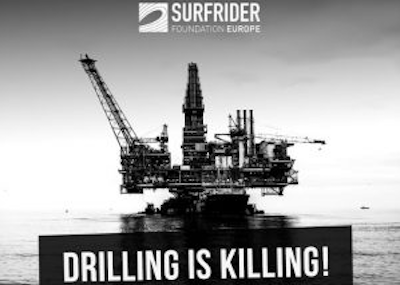 Following the publication of the Manifesto “Toward an EU offshore drilling ban” on April 20nd 2020 which M.E.E.R. also signed, Surfrider Foundation Europe moves into the second phase of its #DrillingIsKilling campaign with the launch of a new online platform. Citizens are now invited to contact their MEPs with direct messages calling for a total ban on offshore oil and gas exploration in the EU! The NGO aims to gain momentum in this effort just ahead of the anticipated evaluation report of the Directive on offshore drilling by the European Commission. 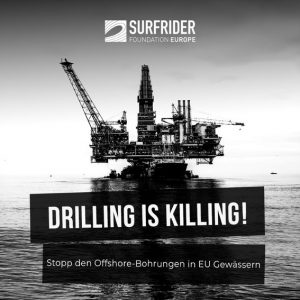 The Europe-wide relay of Surfrider Europe’s #DrillingIsKilling Manifesto last April demonstrated high enthusiasm among citizens to raise awareness and act against drilling at sea. Now, with the citizen mobilization platform powered by askforchange.surfrider.eu, the NGO is giving citizens the tools to turn passion into action.

The goal of this campaign is to call on European parliamentarians to ban oil and gas exploration and exploitation activities in all European waters by 2035.

Contributing to the campaign would:

At this moment, a real opportunity exists to ban offshore oil and gas drilling in the EU. For Surfrider Europe’s demands to be heard and implemented by public decision-makers, every voice matters.

Acting now would allow for a more ambitious environmental protection objective and accelerate the end of offshore in Europe:

Antidia Citores, a spokesperson for Surfrider Foundation Europe, affirms that the political agenda calls for immediate pressure from citizens:

“2020 offers a unique chance to shape the future of the continent’s energy policy. Citizen mobilization has been essential to put climate issues on the agenda of European institutions. The exit from fossil fuels and the abandonment of offshore drilling is an immediate and concrete way of aligning with the ambitions of the Paris Agreement ”