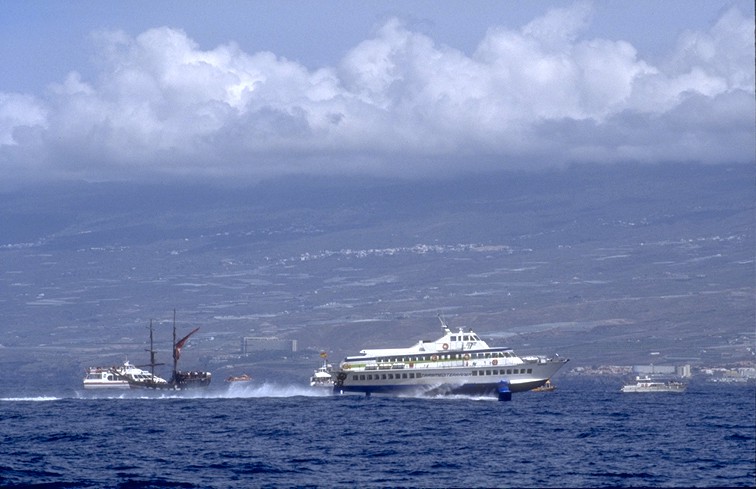 The most beautiful eye-wash

It is reported that the marine area in the southwest off Tenerife has been designated as a “World Heritage Site for Cetaceans”. Having already been established as a Natura 2000 protected area by the EU, then designated as Parque Marina de los Cetaceos (Whale Natural Park) and most recently declared as a Hope Spot by Sylvia Earle’s organisation Mission Blue, this is the next recognition of the unique whale and dolphin occurrences off the island. This is actually a reason to rejoice. Because the increased attention can lead to special protection being given to this extraordinary natural treasure in the future.

But the reality is unfortunately quite different: The area is one of the most overused by tourism in the world. Every day (until the crisis in 2020 hit) dozens of whale-watching boats criss-crossed the area from morning to night. In addition, there are countless excursion boats, private sailors, motor yachts, jet skis, etc. From numerous legal and illegal discharge points, (often untreated) sewage runs into the ocean. There is a lot of rubbish floating in the ocean, or already lying on the bottom. And on top of all this – as the very worst evil – there is the densest transport network of high-speed ferries in the world.

In this respect, the whales and dolphins off Tenerife were under massive pressure from unregulated whale-watching tourism, pollution and the constant danger of being run over by ships until the Corona crisis. Effective measures to protect them? Meaningful regulation of whale watchers? Speed limits for fast ferries? No chance! The only thing that has given the whales and dolphins a real break in recent decades is probably the current pandemic, which has (tragically!) brought tourism in the Canaries to a standstill.

The government of the Canary Islands and the Spanish government in Madrid have so far done too little to ensure that pilot whales, sperm whales and 28 other whale and dolphin species are protected from the above-mentioned threats. One gets the impression that the decision-makers are only particularly good at one thing: finding nice words for an unpleasant situation.
Thus, the statement of the managing director of Turismo de Tenerife, David Pérez, about the current new award speaks for itself. Not a word about the worthiness of protecting the sea, but a clear emphasis on the positive effect on tourism and the “sustainable management of marine resources”. There is really no better way to sum up how use-oriented the Canary Islands Officials see the matter… As if it were not sufficiently known that tourism in the southwest of Tenerife is a decidedly negative example for the entire industry. And as if its 1.4 million whale-watching tourists in 2019 were not enough. Tourists, of whom, it should be noted, very few take part in a natural history excursion, but instead receive little information about the animals and their habitat during the “whale-watching tours” off Tenerife, which usually last no more than 2 hours, but are entertained with plenty of music, alcohol, pirate shows and other extras. Whale watching off Tenerife is still considered one of the worst examples in the world. All the fine words and international honours don’t help.

The motto must be ACTION instead of words. The current crisis is having an enormous impact on the Canary Islands. It would be a good time not to adopt a “back to the old normal” attitude, but to creatively think up new ways of putting tourism on a new footing. Away from mindless mass tourism, towards ecological sustainability – also in whale watching! What is needed is a policy that, instead of again giving priority to tourism – and thus to people – finally does something good for these wonderful creatures. It has long been known what needs to be done to counter the risk factors of collisions, poisoning and stress for the animals.

We at M.E.E.R. – as well as a whole range of committed scientists and environmentalists – have been working for over 20 years for the regulation of fast ferry traffic and the implementation of effective marine nature conservation measures on the Canary Islands.

After all, when an area is recognised as a “World Heritage Site for Cetaceans” (an unofficial category of the WCA organisation), the ones who should benefit most are those to whom this honour is dedicated: the whales themselves!